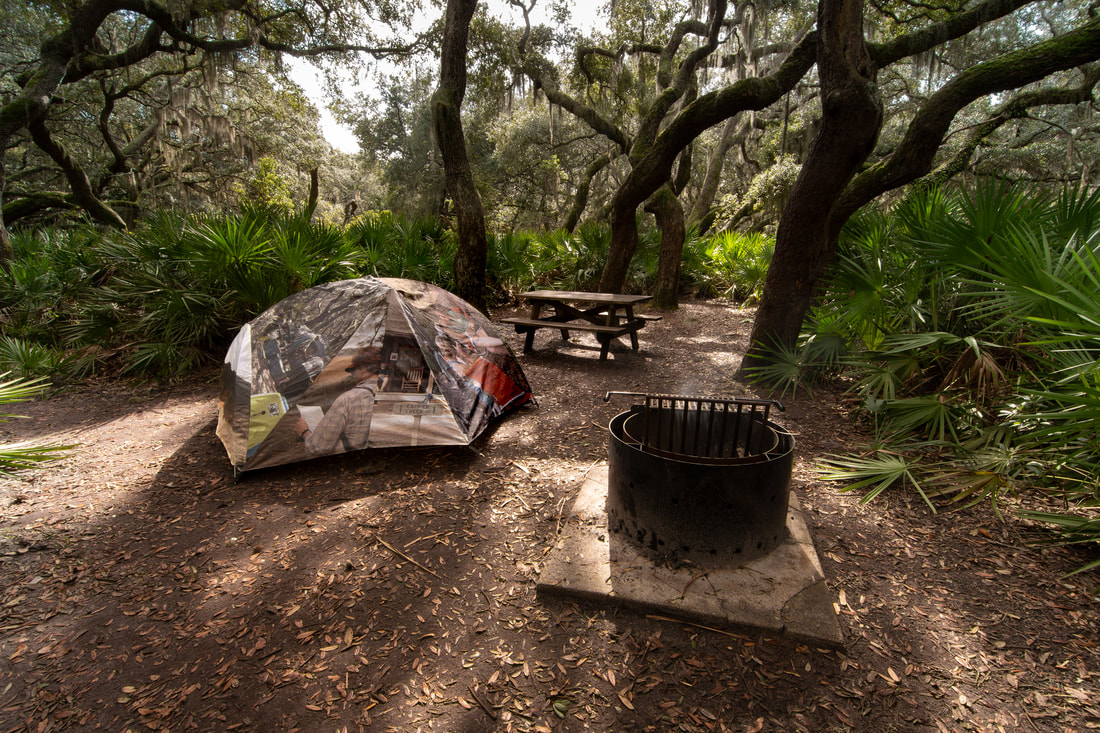 In the fall of 2020, collaborator Katie Hargrave and I sewed a custom tent featuring images taken by visitors to Cumberland Island National Seashore off the coast of Georgia. We set the tent up at Sea Camp, a campground on the island, and photographed it. The tent and the images became the elements of an installation included in the 2021 Atlanta Biennial.
Cumberland Island (Sea Camp), installed at Atlanta Contemporary, 2021.
Curator of the Atlanta Biennial, Dr. Jordan Amirkhani, wrote:

Tennessee-based artist Katie Hargrave and Florida-based artist Meredith Lynn work collaboratively to explore the historical, cultural, and environmental impacts of public lands and to grapple with the far-reaching implications of American mythologies of open space, frontiers, and freedom. For this project, Hargrave and Lynn traveled to Cumberland Island on the coast of Georgia—the state’s largest and southernmost barrier island, and home to 9,800 acres of Congressionally-designated “wilderness”—to experience and seek to understand this site as tourists and artists. Originally settled and cultivated by the Mocuma peoples over 4,000 years ago, European colonists from Spain, France, and England systematically destroyed the various Native communities struggling to remain on Cumberland Island across the 16th to 19th centuries, eventually transforming the island into a network of cash crop plantations dependent on slave labor. Purchased by the wealthy industrial capitalist Thomas M. Carnegie in 1880, Cumberland Island was eventually sold to the National park Foundation in 1972 after much in-fighting between Carnegie family members, real estate developers, environmental activists, and the local community. Hargrave and Lynn’s tent, printed with open access images of Cumberland Island’s campground, stands as a modest monument to those who have claimed these lands across the generations and asks questions about what and who “public” land is for.